The First Minister tells MSPs computer systems and staff are “on track” to be ready to collect the Land and Buildings Transaction Tax but refuses to disclose details of contingency plans if they are not. 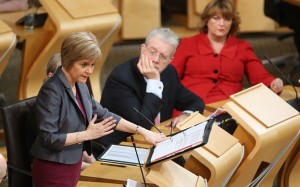 Nicola Sturgeon has insisted the staff and computer systems required to collect the SNP’s new property purchase tax were “on track” despite independent auditors warning they may not be ready in time.

The First Minister said Revenue Scotland, the country’s new tax collection agency, would be up and running in time for the April 1, 2015 start date of the Land and Buildings Transaction Tax (LBTT).

But she refused to disclose the details of contingency plans that are being drawn up in case the deadline is met, other than saying that they did not include delaying the LBTT’s introduction or the British taxman taking over.

Opposition parties said her responses, during First Minister’s Questions, were inadequate and demanded Revenue Scotland’s head be hauled before MSPs. Eleanor Emberson did not disclose the problems when she appeared before a Holyrood inquiry last month.

Ms Sturgeon delivered the assurances after Audit Scotland issued a damning report warning that preparations are behind schedule and the deadline for implementing the IT system is now “very tight”.

This prompted widespread concerns that Scotland’s housing market will be thrown into chaos as LBTT is replacing Stamp Duty in Scotland and will apply to between 450 and 600 transactions a day immediately upon its introduction.

Audit Scotland warned that without computer systems each house purchase may have to be processed manually, raising the prospect of delays, mistakes and higher costs.

It is the latest blow to LBTT, which John Swinney, the Scottish Finance Minister and Ms Sturgeon’s deputy, has boasted is the first tax set by a Scottish finance minister for three centuries.

Willie Rennie, the Scottish Liberal Democrat leader, said £441 million of revenue was at stake and twice pressed Ms Sturgeon for “some description” of the contingency plans referred to in the auditors’ report.

He asked: “Does it involve HMRC (HM Revenue and Customs) having a continued role, are the taxes going to be delayed, are we moving to a paper-based system in the contingency plans?”

“But the key point I would have thought the chamber would want to hear is that the taxes will begin to be collected on April 1, and Revenue Scotland is on track.”

The First Minister disclosed 16 out of 40 staff have now accepted jobs, five have been offered employment while a further five are going through the recruitment process. The remaining 14 posts will be advertised in January.

However, the Audit Scotland report warned this timescale provided little time to spot and fix problems, to train staff, to provide guidance to solicitors and to ensure it is compatible with the Scottish Government’s computer systems.

Speaking after the exchanges, Ian Gray, Scottish Labour finance spokesman, said: “We are 14 weeks away from these new taxes coming under the control of the Scottish Parliament and two of those are Christmas and the New Year holidays.

“The SNP are constantly bleating about getting more tax raising powers yet here are powers they do have and they can’t organise the collection properly.”