As they come down in one part of Glasgow, so they go up in another. 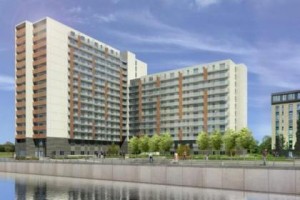 Dozens of high-rises have been dynamited across the west of Scotland in recent years, with the iconic Red Road towers skyscrapers scheduled to be next.

But now developers have applied for permission to build what critics say is a classic 1960s and 1970s tower block – smack in the middle of what was once pitched as a new riverside yuppie neighbourhood.

Dandara has unveiled plans for a 16-storey development of nearly 350 flats for “midmarket” rent in Glasgow Harbour, sparking horror from nearby residents.

Critics believe the Dandara project is one of the biggest of its kind in Scotland, a privately owned skyscraper in which all the flats will be for rent, a sort of commercial Red Road.

The company, however, reckons it has identified a gap in the market for high-rise living for professionals who can’t – or don’t want to – buy.

It had planned to build to a different spec for mixed tenure – many of the homes in Glasgow Habour are either owner-occupier or buy-to-let – but is understood to have changed tack.